UP Board, Blinky in C#

(this is not my jewellery CNC blog, that's here : http://digital-jeweller.blogspot.com/)


Blinking an LED on the UP.. Sounds simple?

If you have done the below correctly you should have an outcome as this:
(or if you are lazy, download the project HERE)

The majority of "makers" being targeted by the myriad of new SBC's on the market are not professional coders, most are not even amateur coders.. for the large part they are people like me.. interested in learning a new technology, and willing to google for snippets and copy-paste a working program together.

The success of boards like the Raspberry Pi and the Arduino series are largely due to their plain English, down to earth API's, aimed at "makers" with ample clear instructions and tutorials making the learning curve fast.

SO: it was a little disappointing to have run into such a lot of headaches with my UP Board, and so little documentation to try figure it out.  Anyhow, getting back to Blink...

Lets examine this simplest of programs on a few other platforms.. lighting up an LED.

There is a commonality of implementation that makes it simple to understand the process..


Now lets examine doing the the same on UP Board, using C# in windows 10.

You will need to download the SDK and Framework, below are the ones used in this example. I don't maintain these files so they are subject to change.

The framework contains some drivers. Install the drivers using the adequate advice in the PDF in the folder.

In the SDK is an example project called DIO, (written in CS).

Copy the DIO project to a handy location and copy out the file aaeonEAPI.dll. Now open the DIO project in VS and leave it open.. we will need to copy some stuff over later.

(if you attempt to compile the project as is in VS15 you will hit a wall, search my name CeeBee on the UP forum for instructions on how to bypass this issue, but for now we only want to copy files from this project, not run it, so onwards...)

Now lets go back to the DIO projects main application code and copy and paste the lines near the top of it which import the DLL calls from the aaeonEAPI.dll, into your program.

Open and copy all the content EAPI.CS file main body.

(its been done in the region wrappers in the code below)

Now finally you are ready to start actually coding.. you can close the DIO example.

Returning to our examples above we can immediately write the following code and expect a result.


BUT... It didn't work, did it? The current API has a glitch, either by mistake or by design the pin numbering is out by -1... changing 3 to 2 in example above woudl make pin 3 light up...

BUT,  what is input, what is output, what is high, what is low, and boy is that code ugly, all those uint's and 0xFFFFFFFF's which we have no idea about, why are we looking at them?

SO, lets fix that.. and make it look prettier..
(and fix that pesky bug)

Add these variables to the top of your code,and then add these two voids into your code
(these are the most basic examples to get it working without any error checking code!!)

and PIN3 will now fire up happily...

This is also now far more legible, noting you can call these voids anything you like, or return an error etc.

If you own your board, and the code is for you, to be added to existing projects, you don't need to go much past this,

For the rest, lets move onto SuperBlinky...

So the first actual "Blinky" program for the UP board... .. based on the above cleanup and fixes, its a little beefier, with selectable pin, selectable millisecond delay and the number of repeats.. and some basic error catch.

(you can delete the form, BlinkPin and Start_Click and basically have a template ready to start working in.)

EnableSDIO()
which with return with an int ERR if there is one.

SetPinDirection(int pin, uint direction)
which will accept the pin number and either INPUT or OUTPUT as a uint variable, it will return an int err if it went kooky on you.(status.text is updated)

GetPinDirection(int pin, uint direction)
which will accept the pin number and a variable to pass to the API for the pin direction. it will return and int of either ERR (status.text is updated) or 1(input) or 0(output).

SetPinState(int pin, uint state)
which will accept the pin number and either HIGH or LOW as a uint variable, it will return an int ERR if it went kooky on you. (status.text is updated)

GetPinState(int pin, uint state)
which will accept the pin number and a variable to pass to the API for the pin state. it will return and int of either ERR (status.text is updated) or 1(high) or 0(low).

(errors and values as int as its a PITA to keep having to convert between uint's to do if/then compares to other ints, change as required)

You will need to create a form with these components 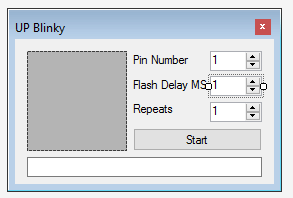 and hopefully you get the same result as me, a nice easy to use blinker app!

(To keep yourself sane, use #region ~ #endregion wrappers to hide the stuff you don't want to see while you are working so your actual code ends up looking like bleow) 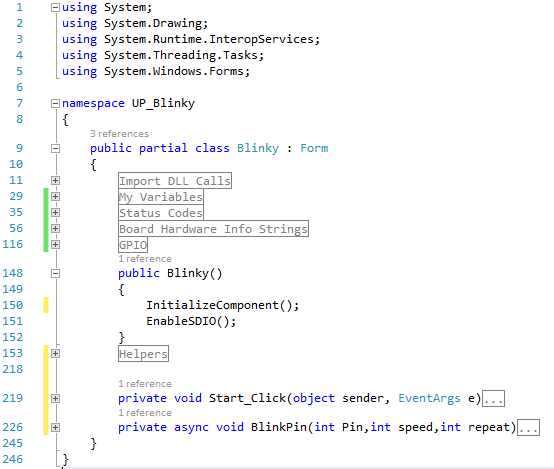 Much work to be done deciphering the API documentation...
Posted by Unknown at 21:24